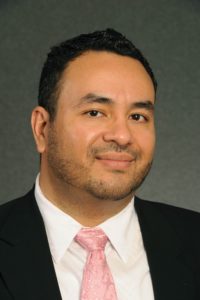 Nabil El-Ghoroury is currently the Executive Director of the California Association of Marriage and Family Therapists (CAMFT). CAMFT is the leading organization of mental health professionals in California, representing over 32,000 marriage and family therapists. Nabil is responsible for a $6.5 million budget, 26.5 FTE employees, a board of 12 MFT leaders, and over 14 committees. CAMFT has a network of 28 chapters across the state.

From 2009 – 2018, Nabil served as associate executive director at the American Psychological Association (APA), where he directed the American Psychological Association of Graduate Students (APAGS), the graduate student group within APA. In this role, he functioned as the CEO of a medium-sized association (approximately 27,000 members), providing leadership, management, coordination, and evaluation of all projects and activities for the organization. Nabil served as a primary liaison between APAGS and other leadership groups within APA and within the field of psychology. He oversaw and provided guidance to a 14-member committee of student leaders and 5 subcommittees. He was responsible for organizing over 40 hours of programming at each annual APA Convention.

Nabil has been recognized by his peers for his work. He was awarded the Achievement in Public Information Award by the Ohio Psychological Association in recognition of him providing media outreach in Spanish after the Virginia Tech shooting. In 2016, he was accepted into the Diversity Executive Leadership Program (DELP) of the American Society of Association Executives (ASAE).

Nabil has a particular interest in diversity and inclusion. Under his leadership, APAGS added Transgender to the APAGS Committee on Lesbian, Gay, Bisexual and Transgender Concerns and he recruited the first transgender member. He was the lead author of A Survival Guide for Ethnic Minority Graduate Students. He was the Diversity Committee Chair for the Society for Pediatric Psychology from 2005-2006. While working for APA, he organized student leaders to produce three well-received and award winning publications for LGBT and ethnic minority students. He has presented around the world on health disparities in autism in the US (which he has presented in English and in Spanish), most recently in Ayacucho, Peru.